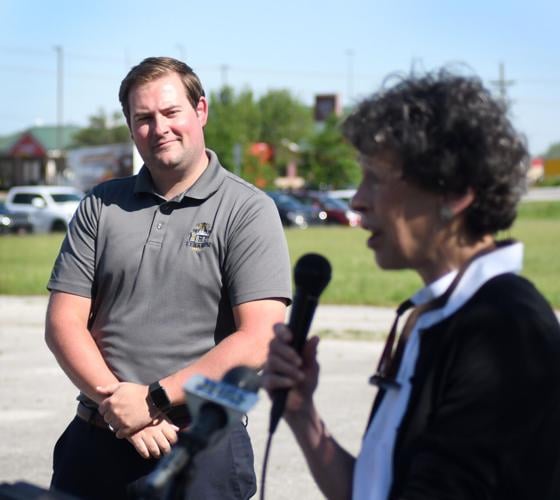 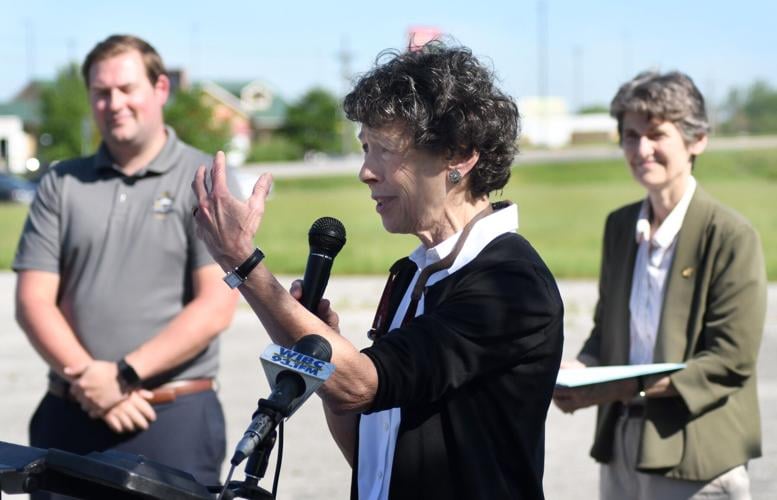 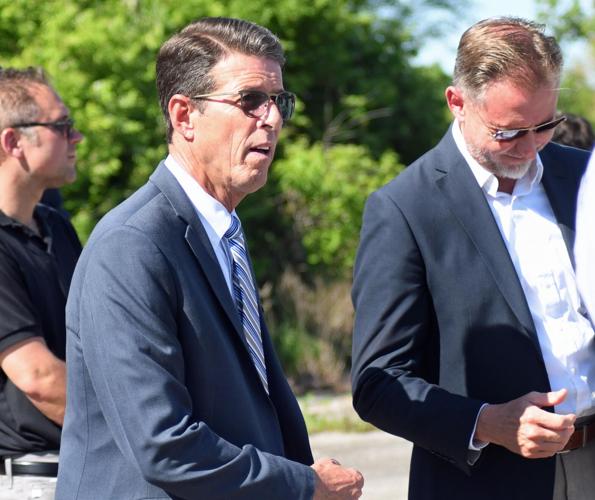 William ‘Bill’ Walters (center), director of the East Central Indiana Regional Planning District, expressed appreciation Friday for $500,000 in brownfield grants to be used in Delaware County, and particularly Muncie. Walters was in Lebanon for an announcement that Hoosier communities will receive $9.4 million in brownfield grants.

William ‘Bill’ Walters (center), director of the East Central Indiana Regional Planning District, expressed appreciation Friday for $500,000 in brownfield grants to be used in Delaware County, and particularly Muncie. Walters was in Lebanon for an announcement that Hoosier communities will receive $9.4 million in brownfield grants.

The federal government on Friday announced $9.4 million in brownfields grants to help Hoosier communities convert contaminated sites into productive ones.

They were in town for the announcement staged at the future site of the Lebanon Fieldhouse, a 200,000-square-foot indoor sports facility.

The 92-acre lot along Ind. 39 at Interstate 65 sat empty for decades despite its desirable location until the city used brownfields grants to clean up the property and make it attractive to investors, Lebanon Mayor Matthew Gentry said.

A brownfield is a property that may be unattractive to investors because of the potential for contaminants or pollutants, such as lead or asbestos.

Brownfield grants allow authorities to assess and remediate sites to ensure potential investors they are safe and ready for redevelopment, Gentry said.

Lebanon has used about $500,000 in previous brownfield grants to rehabilitate several sites, including: the former Montgomery Ward building; the site for the future Brakeman building, an $8.5 million mixed-use restaurant and retail space with 44 apartments; and industrial buildings, Gentry said. The grant announced Friday will help the city analyze known brownfield sites and identify new ones.

The East Central Indiana Regional Planning District (ECIRPD) will also receive $500,000 to update an inventory of brownfield sites and conduct environmental site assessments in Delaware County, with a focus on the city of Muncie, Shore said.

Priority sites include a 75-acre former glass manufacturing facility, a 1.5-acre site that was part of a commercial district until the 1960s, and a half-acre gas station and auto repair site vacated in 1999, the EPA announced.

The ECI Regional Planning District has successfully used brownfield grants on other projects, perhaps most notably in remediating contaminants and developing Cornerstone Park in Muncie, and in redeveloping the former Blackford County Hospital in Hartford City, William ‘Bill’ Walters, director of the planning district, said.

“Having the opportunity to work in cooperation with the U.S. EPA has been of tremendous benefit to the East Central Indiana Region,” Walters said.

“This funding will support Gov. Holcomb’s priority to continue cultivating our strong and diverse economy in Indiana and serve as a vital aspect in turning blighted brownfield sites into neighborhood assets,” said Jim McGoff, chief operations officer and director of environmental programs for the Indiana Finance Authority (IFA).

The IFA received $5.9 million in two grants for site assessments and development in target areas of Lafayette, Gary, Frankfort, Evansville and New Castle. The IFA will use $3.9 million of the total to supplement its Brownfield Cleanup Revolving Loan Fund for Hoosier communities.

Other grant recipients are: