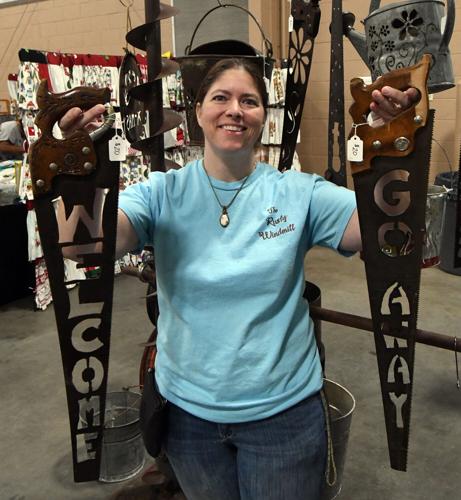 Robyn Nearing is a welder and co-owner of

of Russiaville, who brought her newest hot seller, the “Go Away,” sign to the Boone County Extension Homemakers Holiday Bazaar on Saturday in Lebanon. 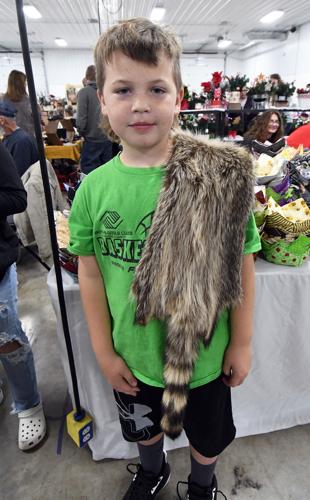 Carson McGinley, 9, of Lebanon, shows off the racoon pelt he bought at Saturday’s bazaar. 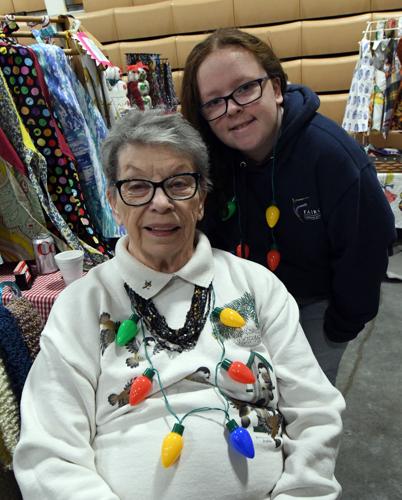 Robyn Nearing is a welder and co-owner of

of Russiaville, who brought her newest hot seller, the “Go Away,” sign to the Boone County Extension Homemakers Holiday Bazaar on Saturday in Lebanon.

Carson McGinley, 9, of Lebanon, shows off the racoon pelt he bought at Saturday’s bazaar.

For a mere $35 — $10 of his own and the rest his mother’s — Carson bought a tanned raccoon pelt, whiskers and all.

Women, young and old, rushed from one booth to another holding gifts and artwork. They examined handmade candles and soaps, considered Christmas ornaments and caressed pottery. They bought upcycled dog chew toys and walnut charcuterie boards. The spattering of men present were greatly outnumbered.

But 9-year-old Carson just found a spot out of the way, leaned against a post and admired the eyeless raccoon face while his mom and sister shopped.

The pelt started out a little stiff from the tanning process but became pliable as Carson stuck his arm up its middle as if it were a puppet, arranged it around his neck with the striped tail in front and ran the whiskers through his fingers.

Passersby paid him no attention in their quest for one-of-a kind gifts and found all sorts of surprises in more than 100 stalls that spanned the pavilion and two animal barns.

The turnout appeared to be a larger than last year’s show, judging by the parking lot, and the number of booths returned to pre-COVID-19 levels.

Welders Robyn Nearing and Wes Meinze, who operate Rusty Bloomers of Russiaville, returned this year after brisk sales in 2021 and had a steady line of buyers of their metal sculptures.

The pair cut words and figures into repurposed metal items such as old tool boxes and milk cans. Most often the words include “Welcome,” or something else folksy and gracious.

But a friend asked Nearing this year to cut “Go Away” into an antique saw. “I cut two and took the extra to the next show, and it kind of took off,” she said with a laugh. The “Go Away” signs were a crowd pleaser at the bazaar.

And Anelia Berreth’s reversible, colorful aprons with a pocket on each side also flew off the racks at $12 each or $10 each for more than one.

Berreth, of Whitestown, brought her granddaughter and partner, Claire Bryant, who specializes in sewing pet gifts, such as dog collars and inexpensive catnip toys, which were outselling their other offerings just before lunchtime.

“We’ve already made as much today as we did in the whole day last year,” Bryant said.

The show expanded into the Witham Pavilion when it was built, and in 2019 the show filled the pavilion and two halls, which house sheep and goats during the 4-H fair.

Boone County Extension Homemakers, a volunteer organization, uses bazaar proceeds for scholarships for high-schoolers and adults returning to school, to make gifts for Riley Hospital for Children and other patients, for Boone County Head Start program and for Extension education.