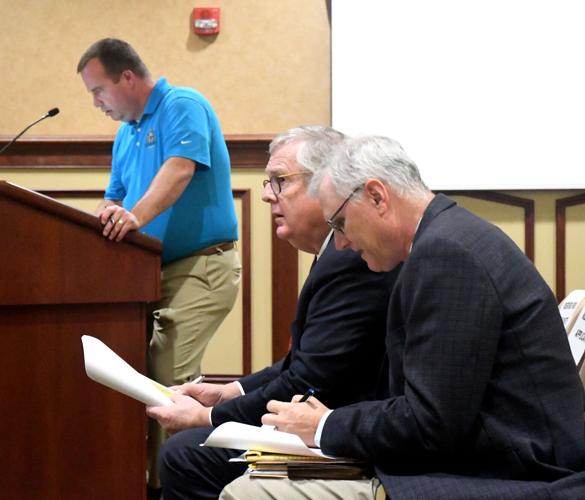 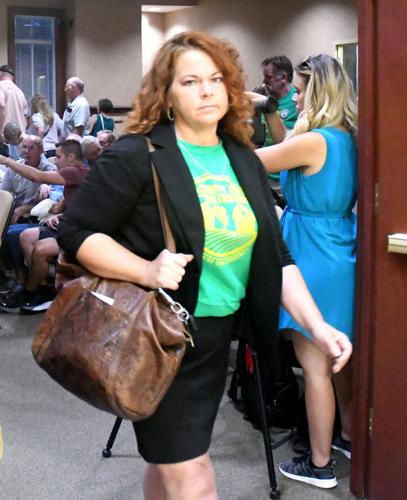 Carrie Douglas of Thorntown leaves Tuesday's meeting. She is a member of the grassroots organization Boone County Preservation Group and said that farmland is a natural resource that would be lost with industrial zoning. 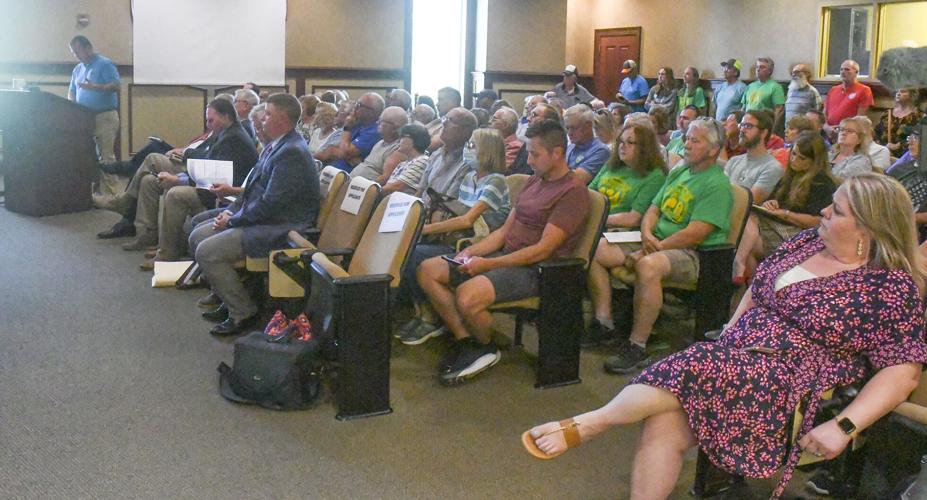 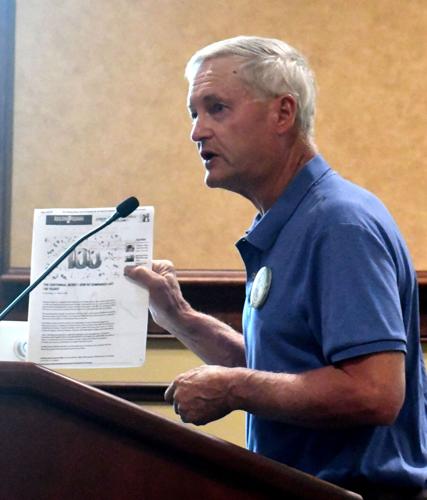 Boone County farmer Allen Mohler asks the Lebanon Plan Commission to consider the short time companies remain in business as compared to how long farmland is viable before allowing industries to situate on farmland.

Carrie Douglas of Thorntown leaves Tuesday's meeting. She is a member of the grassroots organization Boone County Preservation Group and said that farmland is a natural resource that would be lost with industrial zoning.

Boone County farmer Allen Mohler asks the Lebanon Plan Commission to consider the short time companies remain in business as compared to how long farmland is viable before allowing industries to situate on farmland.

The Lebanon Plan Commission on Tuesday voted to recommend general industrial zoning for land earmarked by the state for an innovation and research district.

The five-to-three vote came at the end of a three-hour meeting that included pleas from neighbors of the project for the commission to slow down the process and consider the project’s impact on neighbors, cropland and the community’s way of life.

The zoning request is the first step to annexing 1,396 rural acres that include the site where Eli Lilly and Co. plans to build a $2.1 billion facility.

Thirty-two landowners of 56 parcels petitioned the city for voluntary annexation and a zoning classification of general industrial for 1,396 acres north and northwest of the city.

Those rural acres to be annexed represent the first phase of the Indiana Economic Development Corporation’s LEAP Lebanon Innovation and Research District on an estimated 8,000 to 10,000 acres of mostly farm and rural land.

LEAP stands for limitless exploration/advanced pace. The IEDC confirmed to the city it has already secured the rights to purchase about 6,000 acres on which it would develop a high-tech industrial park.

None of the petitioners spoke during the meeting, although Lebanon attorney Kent Frandsen spoke on behalf of the IEDC and the petitions.

The economic impact of the project and other benefits that would come with it “are too good to let get away,” Frandsen told the plan commission.

A standing-room-only crowd of landowners and concerned citizens in the Lebanon Municipal Building meeting room disagreed.

The IEDC has not submitted plans for sites, drainage, discharged water and sewage, water use and water sources, or other particulars, and it would be “reckless” to approve industrial zoning “when we don’t know what’s going to be here or there,” Brain Daggy of Hazelrigg said.

Daggy asked the commission to zone selectively. Brian Tandy later proposed to zone the land for Lilly as general industrial and the rest of the proposed area for single family use, but his motion failed.

Tandy said after the meeting that he’s excited about the Lilly project but has reservations about the open-endedness of the remaining project, for which the state has named no occupants.

The state is buying that land to have it zoned and ready for companies. Speed to market is crucial in attracting advanced technology industries, Frandsen said. Once companies decide to build, they want to do it quickly, and states are in hot competition to attract them, he said.

Frandsen described much of the land for the proposed project as largely vacant and empty in terms of homes, but Carrie Douglas of Thorntown, a member of the grassroots organization Boone County Preservation Group, said his characterization was insulting.

“Farmland is not vacant,” she said. “It’s not empty land.” Farming and producing food for the nation are the land’s best use, and general industrial zoning would destroy a natural resource and prevent the land’s use as farmland ever again, she said.

She asked what would happen if the land is zoned general industrial and the high-tech, advanced manufacturing companies the IEDC is courting never come. Would the land then be used for less desirable industry, she asked.

“Farmland will be here until people stop eating,” Mohler said.

“It’s a place to start,” commission chairman Keith Campbell said of the zoning recommendation, adding, “It can always be changed.”

The plan commission considers only the zoning recommendation, while the Lebanon City Council has authority to determine if the zoning and annexation are desirable for the city. The council may request adjustments in zoning.

And each company will be required to submit an application to the city for the review process before building in the annexed region.

“This effort led by the state is all about reshoring jobs to America and industries that Americans need for the next generation,” Lebanon Mayor Matthew Gentry said after Tuesday’s meeting. “It’s about products we’ll use every single day and medicines that we all need to continue flourishing as a society.”

The federal government has put a priority on making technology, such as microchips, in America as key to national security.

“I think the pandemic is showing everyone the dangers to the consumer, and also to our nation, of having long supply chains … that link back to Asia,” Gentry said.

The next step is for the annexation request to come before the city council for a first reading July 11. It could be passed as early as the July 25 meeting. The city council meets at 7:15 p.m. in the Lebanon Municipal Building, 401 S. Meridian St.