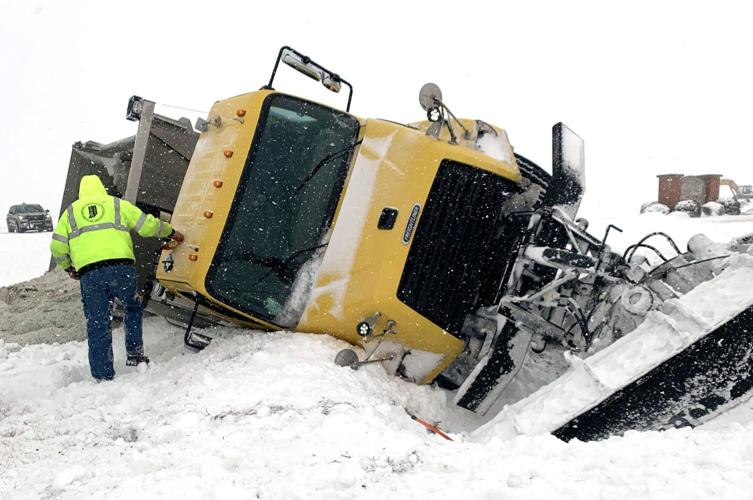 An Indiana State Department of Transportation plow truck rests on its side after sliding off of Ind. 47 East in Boone County last February when county commissioners declared a snow emergency. 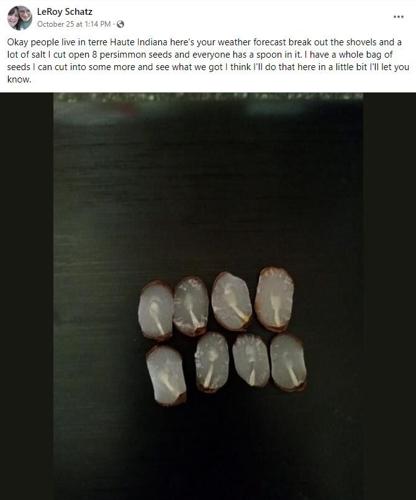 A Terre Haute man posted six persimmon seeds with spoons on social media. Spoons are believed by some to indicate a snowy forecast.

An Indiana State Department of Transportation plow truck rests on its side after sliding off of Ind. 47 East in Boone County last February when county commissioners declared a snow emergency.

A Terre Haute man posted six persimmon seeds with spoons on social media. Spoons are believed by some to indicate a snowy forecast.

Meteorologists and folklorists disagree on what weather winter may bring to Boone County, but local authorities say they always plan for the worst and are ready for whatever comes.

Central Indiana has equal chances of below-, near-, or above-average precipitation and temperatures this winter, according to the National Weather Service.

But those who look to persimmons and woolly worms for weather predictions are stocking up on hot cocoa and snow shovels.

A Terre Haute man cut open eight persimmon seeds and found “spoons” in all of them, he said in a Facebook post. That means heavy snow. Persimmon seeds, split vertically, have figures in the center that look like forks, spoons, or knives. Forks indicate a mild winter and knives a winter that is cold and cuts, according to tradition.

Wooly worms are the larvae of the Isabella tiger moth and have 13 hairy segments that range from very light colors to black. The darker and thicker the hair, the more snow, the story goes.

Judy Fraser of WCIA, Champaign, surveyed an “abundance” of woolly worms, finding that 75% were black or dark brown, and the rest were split between lighter brown and very light. That indicates a cold, snowy winter, she said, adding that woolly worms have been 80% accurate for her annual reports.

An Ohio source, however, said woolly worms are not scientific and not at all accurate but still predicted a cold winter based on the number of woolly worms observed with dense hair this year. The report also indicated a worse beginning of winter, a milder middle, and an ending about like last year, based on color.

“I think maybe it’s already been so cold they decided to hibernate already,” he said with a laugh.

Garst thinks the weather may be lively, “based on the winter coming pretty early this year,” he said, referring to a cold, snowy period in November. “It’s pretty early to have consistent snow, so it tends to make me believe we’re going to have a cold one.”

The weather caused an intensity of slide-offs and fender benders in Boone County earlier than usual, also, he said.

It was so snowy Nov. 12 that a delivery truck driver on his way from Owensboro, Ky., to Bloomington lost control of the truck on Interstate 69 and died when it slid through a guardrail and flipped after hitting an embankment, killing the 32-year-old man.

“We always plan for the worst and hope for the best,” he said.

Last winter was “very mild” until heavy snow in late February when snowdrifts closed back roads and highways and authorities declared a snow emergency. But the county’s trucks have already been on the roads to mitigate slick conditions this year.

Supply chain challenges prevented Parr from adding two new trucks to his department’s fleet this year, as is the usual practice, but Boone County Commissioners on Monday approved the purchase of four new trucks. Two will be delivered in April. The other two were ordered and are expected months later, Parr said. The total cost is about $227,000.

The two older trucks kept in service longer were reconditioned to ensure their viability this year, he said. His staff has already made 10,000 gallons of brine to spread onto icy roads and both barns are full of salt, Parr said.

But the best defense against wintry weather on the roads is preparation, Parr said.

“Slow down and leave early,” he said. “I know everybody says that, but people don’t do it. When you see there will be cold temperatures the next day, the first thing you need to do is plan for the morning’s drive.”

For information about road conditions during a winter storm, visit 511in.org to view INDOT’s Trafficwise map, or download the app on your Apple or Android device. Another way to stay connected is to follow INDOT on social media for regional information and additional resources.