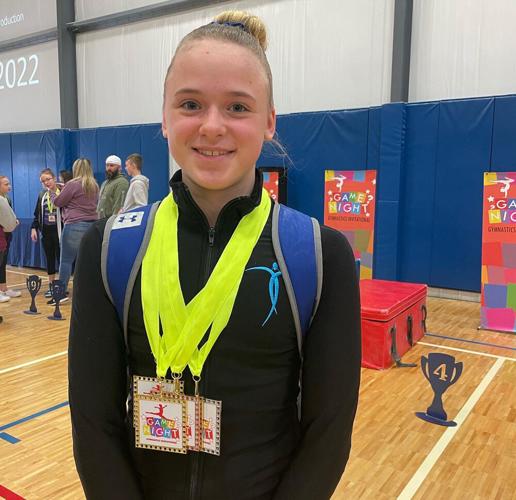 Caroline Berg poses after places first in the all-around at the Game Night meet earlier this year. 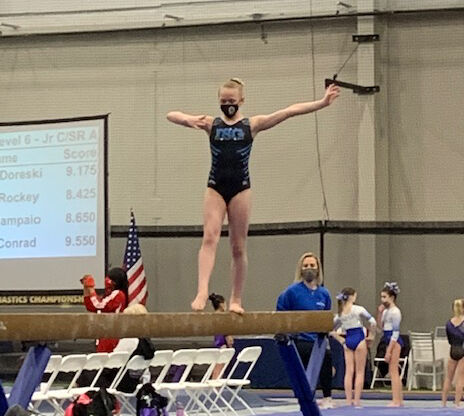 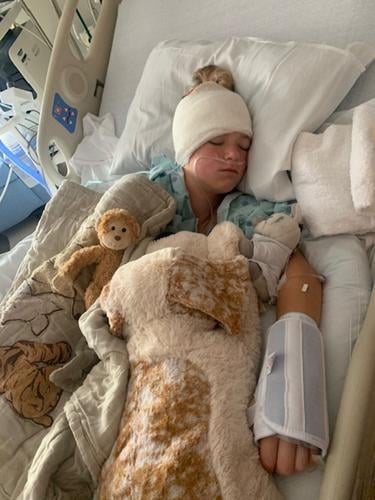 Caroline Berg recovers in the hospital after having surgery to fix an intracranial hemorrhage. 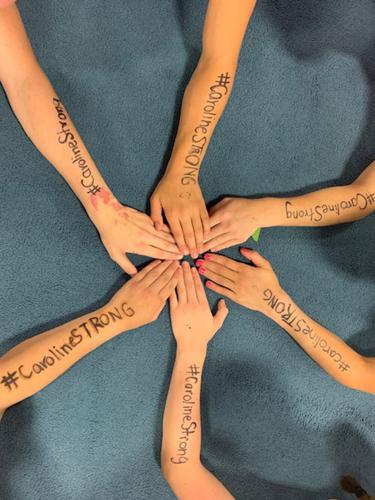 Caroline Berg’s teammates send her messages of support after she suffered an intracranial hemorrhage.

Caroline Berg poses after places first in the all-around at the Game Night meet earlier this year.

Caroline Berg recovers in the hospital after having surgery to fix an intracranial hemorrhage.

Caroline Berg’s teammates send her messages of support after she suffered an intracranial hemorrhage.

ZIONSVILLE — Sept. 9, 2020 started off as a normal day for Zionsville’s Caroline Berg.

She went to school. Then went to gymnastic practice, a sport she had been doing since she was three years old.

Berg came home, ate dinner and did her homework like she had did numerous times throughout the early years of her life.

But as she went to bed that night, everything was about to change.

Berg woke up with a terrible headache, waking up her parents Melody and Michael and telling them she felt like she was dying.

They immediately called the paramedics, who took her to Peyton Manning Children’s Hospital where she was diagnosed with an intracranial hemorrhage in her brain caused by an Arteriovenous Malformation (AVM) – a condition that affects less than 1% of people according to the Mayo Clinic.

She immediately had surgery that night, a move that doctors say saved her life. A more extensive surgery followed a month later to permanently fix the malformation so she would never bleed again.

“It was definitely really scary,” Melody said. “We didn’t know what life would be like for her. Would she ever return to the gym, or how that second surgery would go because she was on the table for 10 hours.”

Coming out of the second surgery, both the doctors and Caroline, now 12, had a goal of getting her back on the gymnastics mat.

Gymnastics had been one of Caroline’s biggest passions. She trained 17-18 hours a week at Indy Stars Gymnastics, rising to a Level 6 gymnast (she is now a Level 7).

She loved watching Simone Biles compete, and way she competed – especially on bars – which is also one of Caroline’s favorite events.

“She was very motivated,” Melody said. “Her goal has always been to become a college gymnast and get to a Level 10. That was her life. She would go to school all day, and then go do gymnastics. She is a highly active kid.”

The recovery process was going to take time. Caroline had some testing done six months after the injury, seeing how her brain functions now compared to before.

There are some differences in her executive level functions, where she will process things a little slower, has a tougher time following multi-step directions and some organizational skills aren’t quite the same.

She had to stop playing her second sport, softball, because of this, but with the amount of practice, rehearsal and routine in gymnastics, she was able to continue the sport she loved.

Working with a physical therapist that specializes in athletes, she was back in the gym working on strength and conditioning a little more than two weeks after her second surgery, and was back flipping and and doing other gymnastics skills about three months after the second surgery.

“We are so proud of everything she has accomplished,” Melody said. “It’s a traumatizing experience, not just for her, but the whole family. Her siblings (older brother Noah and younger sister Juliette) weren’t sure if or when she was coming home.

“We are proud of the way she has owned her story. She is active on social media talking about her brain injury and what it means. Because his isn’t something that happened and is 100 percent over, it’s part of her life now. Her brain is different, she is different and she does a great job of owning that and making it her story and not being a victim.”

A big part of the recovery was the support of her gymnastics family as well.

Caroline said one of her favorite parts of gymnastics is her teammates and the fun they have together.

She has been with the same core group for about four years now and along with her family, have been a great help.

“Her teammates were fantastic,” Melody said. “She was in the hospital for 11 days after the initial stroke, and her teammates sent gifts and we got a signed card from all the gymnasts from Ball State. All the different gyms from around the area sent get well cards. Her teammates did a parade for her, they raked leaves, came and hung out with her when she couldn’t be out and about. It was all really fantastic.”

All of Caroline’s hard work to get back on the mat is paying off.

She is back competing at a high level and has competed in five meets so far this year.

She has placed in the top-5 of the all-around in three of them, and the top-10 in all.

Caroline said she was a little scared and nervous heading back into competitions, but was also really happy to make it back.

“It was pretty exciting and scary at the same time,” Caroline said.

She also said she wants anyone else to know that they can get through tough times and get back doing what they love to do.

“You can’t be scared (to get back out there),” Caroline said. “You just have to keep working hard and do it.”

As for the state meet in a couple of weeks, Caroline has some big goals of how she wants to do.

If she scores well enough, she can qualify for the Region 5 Championships in Louisville at the end of April.