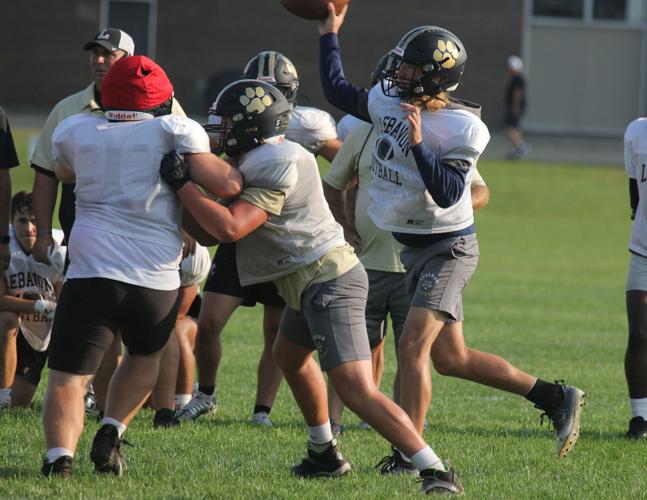 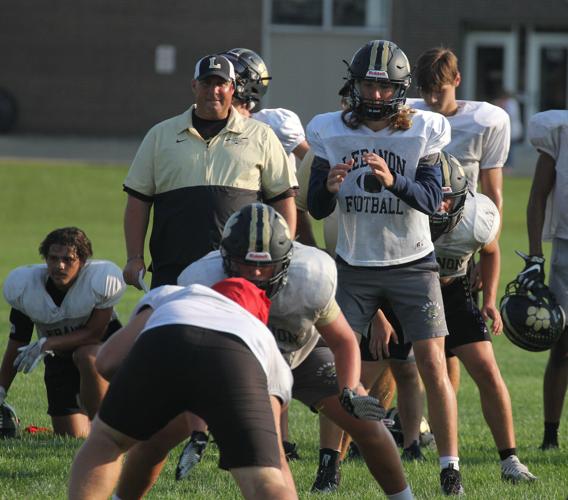 Colin Fouts snaps the ball to Landon Fouts, as their dad Craig watches on at a recent Lebanon practice. 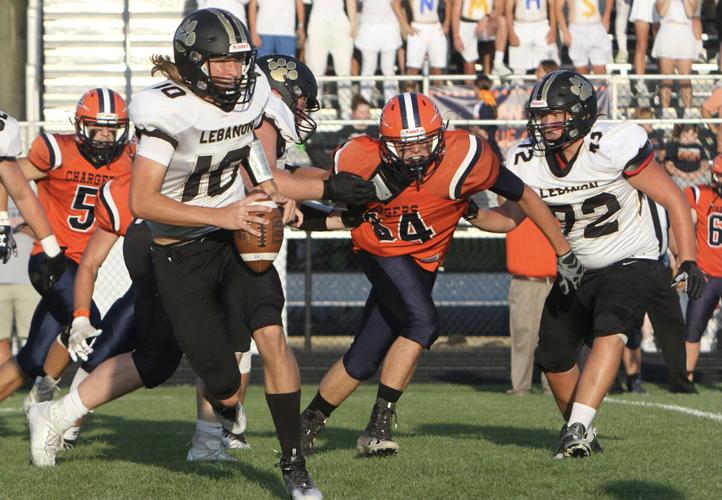 Landon Fouts runs for yardage as Colin Fouts (72) blocks in the Tigers’ win over North Montgomery.

Colin Fouts snaps the ball to Landon Fouts, as their dad Craig watches on at a recent Lebanon practice.

Landon Fouts runs for yardage as Colin Fouts (72) blocks in the Tigers’ win over North Montgomery.

LEBANON – Lebanon High School senior quarterback Landon Fouts never thought he would get the opportunity to share a football field with his younger brother Colin.

But as this past off-season wore on, it was becoming more and more likely that Colin would be called upon for a big role within the Tigers this year, and that has created a dream scenario for the Fouts family.

Not only do the brothers get to share the field together, but they get to do it in an extremely important partnership on the field – quarterback and center.

Colin joked that sometimes Landon can be a little too hard on him during practice or a game. But he quickly added that snapping to someone he has known his entire life can have a lot of advantages.

“He gives me really good advice,” Colin said. “It has helped me a lot on my snaps this year.”

“There is some comfort knowing it’s your brother behind you,” Smock said. “If you mess up, maybe he can fix it for you a little bit. If you didn’t know already, you wouldn’t know they are brothers when it comes to their on-field banter. It’s been fun to watch Colin. He was kind of thrust into that spot and has done nothing but get better, starting this spring. That’s been fun to watch.”

As the younger Fouts gets more accustomed to his role, it’s been to the benefit of the whole team.

Since conference play started, the Tigers have had their two best total yards games of the season, and are averaging more than 320 yards a game.

“I think we are really clicking on all cylinders right now,” Landon said. “We’re really just building it up and ramping it up, and want to make sure we are ready for the sectional.”

Colin said he feels as an offensive line, the Tigers are getting better each week.

There was a lot of turnover from last year, so it took a while to get clicking, but the Tigers are doing a better job of playing as a unit.

“I feel like we have been growing this whole year, especially the offensive line,” Colin said. “Our chemistry has been getting really good and we want to keep it going.”

The older Fouts added that throughout the entire team, the chemistry has been strong all year long.

And now that the Tigers have evened their record at 2-2, they want to continue that success.

“I think the whole team chemistry has been great,” Landon said. “We are all friends, on and off the field. We hang out together and we know how to talk and help each other out. It really helps us build as a team.”

A big reason for their success has been the play of Fouts at quarterback as well.

He said he has been playing quarterback since he started playing pee-wee, because the coach told him it was “the hardest position on the field.”

Fouts is averaging more than 50 yards a game better from a season ago.

“I think I can read defenses a lot better now,” he said of the difference in his senior year. “I think I know what is happening more now.”

Smock said Fouts’ growth over the past few seasons has been really good.

“When he was a freshmen, we didn’t really know what we had or if he would ever become a varsity quarterback,” Smock said. “He was like 6 inches shorter and his arm wasn’t what it is now. From his freshman year to sophomore year there was some growth, and he got thrown in his sophomore year because Garrett (Harker) was gone and he really showed us some things.

“All he has done is gotten better, become a better leader – getting better at calling guys out and making them accountable. He has a voice people respect on the team, and as much as he is willing to say to them, they are absorbing and listening. If he continues to do that, good things will happen for us.”

Part of Fouts’ growth has been the work he puts in with his dad Craig, who serves as the Tigers’ quarterback coach.

The two put in hours upon hours in the off-season to make Fouts better, and that has carried over into the season as well.

It’s not always an easy relationship to have someone coaching their son, but the Fouts family has made it work.

“Landon and Craig work really well together,” Smock said. “That was one of my biggest questions before I brought Craig on: How can you work together? Because that can be a difficult thing. But you wouldn’t know any different, it’s just another coach-player relationship on the field.”

The Tigers hope those relationships lead to some big success at the end of the year.

Losing the opening conference game to Danville means the first goal isn’t completely in the Tigers’ hands, but they are ready to give it their best shot.

“The goal is to win out,” Fouts said. “Hopefully someone beats Danville so we can win conference. We want to take that and continue rolling into the sectional.”