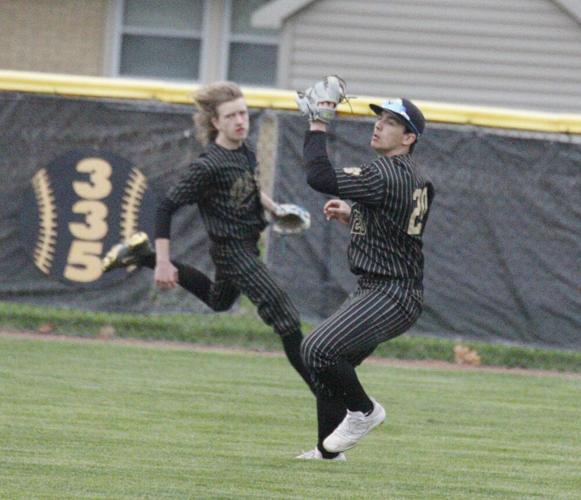 Cannon Morton makes a catch in center for the Tigers on Wednesday. Morton went 3-for-4 with three RBIs and two runs scored in the Tigers’ win. 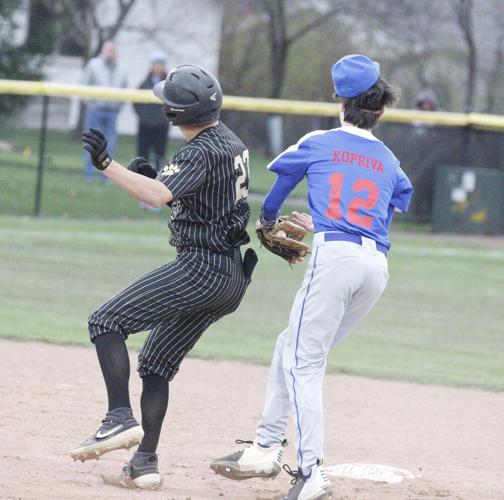 Bryce Kopriva hangs on to tag out Joel Acton trying to advance to second on Wednesday.

Cannon Morton makes a catch in center for the Tigers on Wednesday. Morton went 3-for-4 with three RBIs and two runs scored in the Tigers’ win.

Bryce Kopriva hangs on to tag out Joel Acton trying to advance to second on Wednesday.

LEBANON — As the old adage goes, “patience is a virtue.”

The Lebanon baseball team displayed that on Wednesday night when they took on Western Boone at Memorial Park.

It took the Tigers’ bats a few innings to get going, but they stuck with it and pulled away late in a 10-2 win over the Stars.

“I thought we had a good, patient approach tonight,” Lebanon head coach Rick Cosgray said. “We talked to the kids about not getting out on their front foot and letting the ball travel a little deeper in the zone. We did a good job of being line drive hitters 1-9.”

The Tigers scored twice in the top of the first, capitalizing on three Western Boone errors.

Western Boone came back to tie the game in the top of the second.

With two on and two out, Gavin Hawkins hit a 2-run single to tie the game at 2.

The Stars had three hits in the inning, and four in the first two frames. That exceeded their total from the previous match-up.

“As a group, we understood coming in that we needed to pitch better, hit better and play defense better,” Western Boone head coach Michael Nance said. “We did two out of the three. Tonight was our best offensive approach at the plate. We didn’t get the results in hits or runs, but we put the ball in play, limited strikeouts, had some hit and runs – we did some things we can really build on.”

Western Boone had a chance to take the lead in the third, putting two on with no outs, but couldn’t get the go-ahead run across.

The Tigers took the lead a half inning later, when Peyton Komrska hit an RBI-single to score Brayton Bowen.

Komrska’s single was the third-straight for the Tigers in the inning. Cosgray said as the game went on, his team made the adjustments they needed to at the plate.

“It makes you feel good as a coach when you see your guys are processing and learning from their previous at bats,” Cosgray said. “That’s what it is all about, and hopefully we carry that into the next few games.”

Lebanon capitalized on some Star miscues in the fourth.

After the first two batters were retired, an error kept the inning alive.

“Our defense tonight was the problem, and we will get that fixed,” Nance said. “I am very happy with the way we played actually. I’m not excited about losing 10-2, but the program took a step forward tonight. We only had 12 strikes looking tonight, when we had over 30 yesterday. We executed out game plan at the plate, hit a lot of balls on the screws and Lebanon is a good team and made some plays. Everyone who understands baseball looks at that score and knows it isn’t reflective of the game it was. We just had one really bad defensive inning that blew up on us.”

The Tigers added three runs in the sixth on a wild pitch, an RBI single by Morton and a sac fly from Andrew Phelps.

Marcum and Hawkins each had two hits for the Stars.

Corbin Wells got the win for Lebanon, allowing seven hits in six innings. He struck out eight.

“Western Boone came out aggressive with their bats, and swung early in the counts,” Cosgray said. “They hit a couple fast balls early, but we were able to mix in some of his off-speed pitches later and this is some of the best command he has had. To give up two runs in the second inning and then pitch six innings was a really solid performance.”

Nance said the Stars have to stay focused for the full seven innings, and avoid a big inning like they have given up in recent games.

“If you lose focus in this game for one inning or one play, this game will find you and embarrass you,” Nance said. “I’m not disappointed in the guys, the score is not reflective of how we played. We have to play defense for seven innings like we are capable, and like we did for five innings tonight, and we will be where we want to be. We have long-term goals and we aren’t happy with losing, but we took a step forward in the way we do things.”

Lebanon travels to Lafayette on Thursday to take on Lafayette Jeff.

They host Crawfordsville Saturday in a key Sagamore Conference game.

Cosgray wants the Tigers to build on what they did the last two games.

“Coming off a tough weekend, we wanted to get two conference wins, knowing we had two games to go this week against strong opponents,” Cosgray said. “We did what we wanted to do, now we have to continue and finish the week.”

NOTE: Lebanon won game one of the series 7-0 on Tuesday. Full recap of that game is at reporter.net.