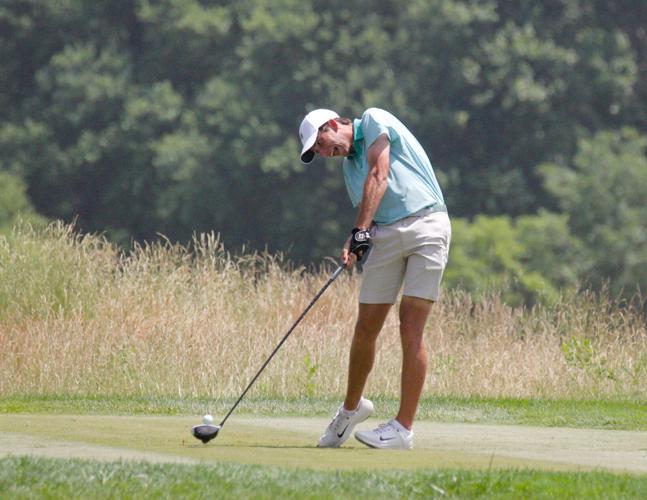 Zionsville’s Adam Melliere tees off during the second round of the IHSAA State Finals on Wednesday. 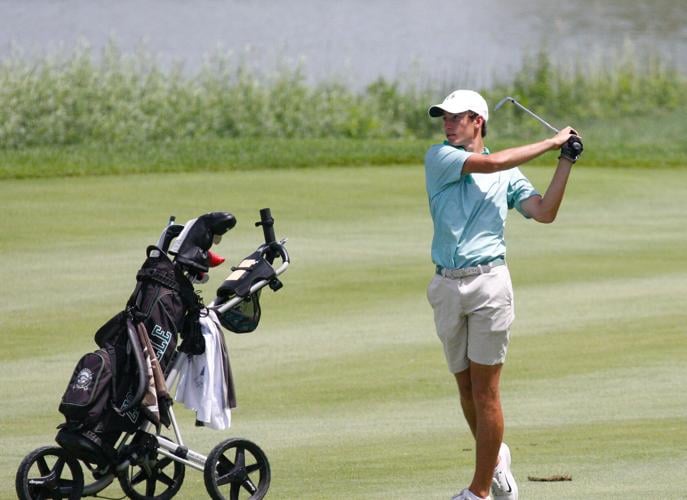 Adam Melliere watches an approach shot during the second round of the IHSAA State Finals. 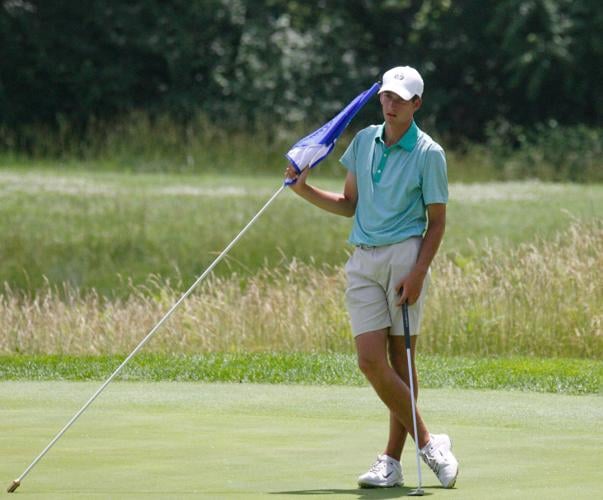 Adam Melliere waits for one of his playing partners to finish a hole at the IHSAA State Finals. 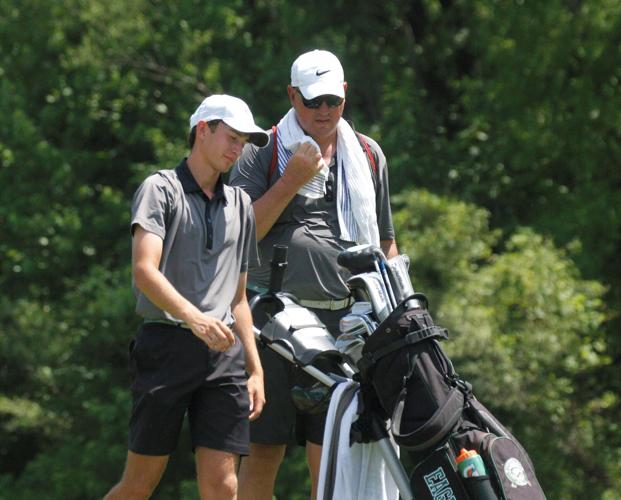 Adam Melliere and head coach Steve Simmons discuss a shot during the opening round of the IHSAA State Finals. 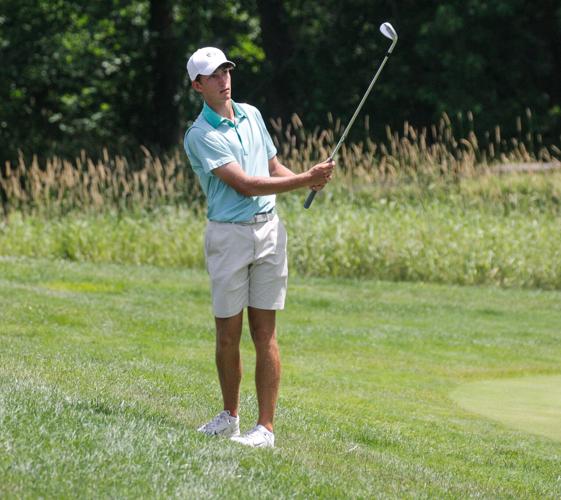 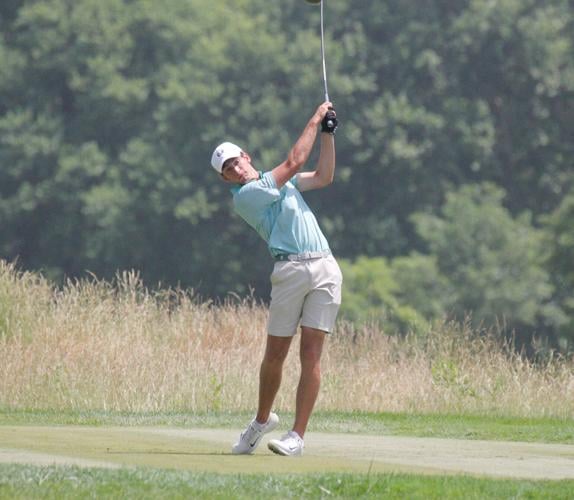 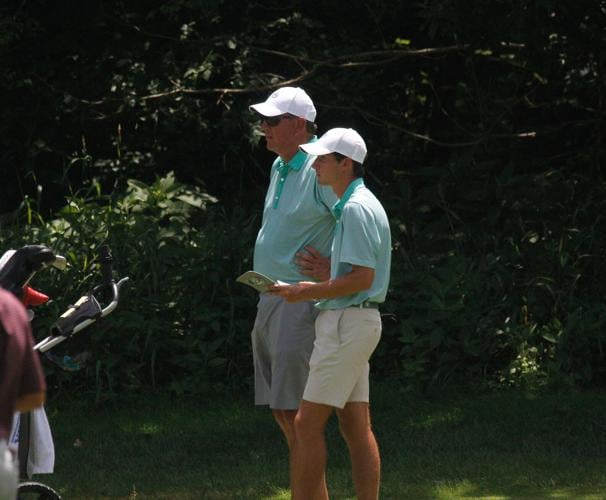 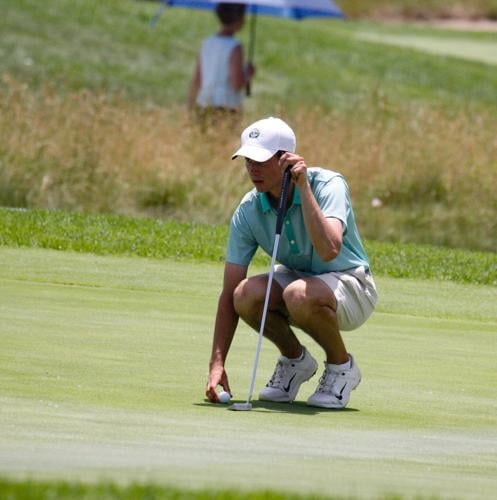 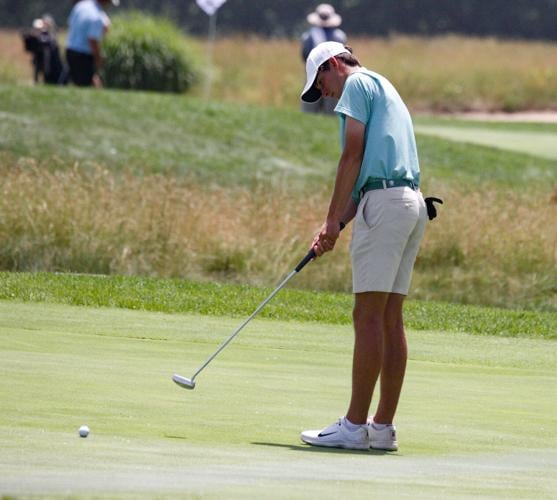 Zionsville’s Adam Melliere tees off during the second round of the IHSAA State Finals on Wednesday.

Adam Melliere watches an approach shot during the second round of the IHSAA State Finals.

Adam Melliere waits for one of his playing partners to finish a hole at the IHSAA State Finals.

Adam Melliere and head coach Steve Simmons discuss a shot during the opening round of the IHSAA State Finals.

CARMEL — Adam Melliere’s ball striking wasn’t as good in the second round of the IHSAA State Finals on Wednesday.

But he was able to show numerous other attributes on the course and prove he is one of the best in the state. Melliere fired a 2-over 74 on Wednesday, finishing the two-day tournament at 3-over (147), placing ninth at the IHSAA State Finals.

Zionsville head coach Steve Simmons said that Wednesday helped show the maturity of Melliere, and how even when he wasn’t playing his absolute best, he could find a way to shoot a good score.

“He wasn’t as sharp today in terms of his iron play, but he really grinded out there,” Simmons said. “Off the tee he was magnificent and I believe he only missed one fairway the entire round.”

Melliere started his second round with three-straight pars, before bogeying the fourth and doubling the fifth.

But he bounced back with birdies on 6 and 7, and made the turn at 2-over after bogeying the tough ninth hole.

“Those birdies showed how I like to play,” Melliere said. “Mentally, I just try to have that next shot mentality and just get refocused. It doesn’t matter what I did on the last hole or the last shot, that’s in the past and I have to move forward.”

Melliere bogeyed the 10th, then rattled off six-straight pars before making a long birdie putt on 17.

Melliere said he likes the back-nine a little better than the front at Prairie View, but to finish even-par over the two days is something he was “really proud of.”

Simmons said that the tournaments the Eagles play throughout the season, along with the tournaments Melliere plays in the off-season, get him ready for situations like the final nine holes at state.

“One of the reasons that we play such a tough schedule is because when we get here, we’re not intimidated by the moment,” Simmons said. “He is used to this; he is used to playing in big tournaments. Even though this back side is tough, he handles it as well as anybody.”

With his ninth-place finish, Melliere secured all-state status for the year, becoming the first Eagle since Joey Ranieri in 2018 to earn the honor.

“It means a lot and it is definitely an honor,” Melliere said. “There are a lot of great golfers out here, I played with Hunter (Melton of Carroll) today and he played great. Knowing there are those kind of player here, it means a lot (to get all-state).

Melliere will have a busy summer playing and is going to be back in action later this week at the USGA Boys Junior Am qualifier up at Purdue.

He said he is looking forward to the summer, and while he likes the way he is playing he wants to make a few tweaks in his swing to be even better.

Simmons said Melliere should enter the summer with a lot of confidence.

“I think he’ll have a great summer,” Simmons said. “There is no doubt he is going to work at it every day, and he is set up for the summer. He’s going to be challenging himself, and he needs to have a big summer and he will. I expect him to play very well. And him being the returning leader of our team next year, I think that bodes really well.”

Wednesday capped the end to a strong junior season for Melliere.

He had a season average of 75.6, including a 73.5 average in the post-season. While he showed tremendous growth on the course, Simmons said his growth off the course was equally as important.

“His work ethic has rubbed off on some of the younger players, and they all respect him because they know he out works most people,” Simmons said. “The big thing is his growth in maturity, taking younger kids under his win and dragging them along with him. He’s done that really well.”

Melliere shoots 1-over in opening round

CARMEL – Zionsville junior Adam Melliere put himself in a position to have a solid finish at the IHSAA State Finals.

Melliere shot a 1-over 73 on Tuesday in the opening round, good for a tie for fourth and two shots off the lead.

“My ball striking was really good today, and I played solid,” Melliere said. “I definitely wish I could have made a few more putts here and there, but overall it was really solid.”

Melliere got off to a solid start with a birdie on the first hole, the followed with six-straight pars.

He bogeyed the eighth and ninth, but came back with a birdie on 12 to get back to even par.

He stayed that way until the 17th, when he had a two-putt bogey and finished 1-over.

Throughout the round, Melliere had other opportunities for birdie or par saves where the putts just didn’t fall.

“I had a couple misreads, especially at 13,” Melliere said. “But overall, I had the right reads, they just didn’t fall. Hopefully I can make them tomorrow.”

Melliere and all the golfers out there had to adjust to the extremely hot temperatures and little wind to alleviate that.

Over the last few holes, the temperature got as high as 94 degrees, but felt like 105. Melliere said he had a cold towel to put around his neck, plus made sure he was staying hydrated throughout to keep his energy up.

He also said he felt like it was an advantage teeing off in the earliest group, getting a lot of holes done before the heat got really bad.

“I definitely think it was an advantage,” Melliere said. “It wasn’t as hot early, and it was worse on the back nine. So it was better to go out early.”

Melliere’s score of 73 was the second best score by a player playing as an individual, one shot behind Carroll’s Hunter Melton.

Melliere said it was a “bummer” that the rest of the team couldn’t be playing with him, but that it didn’t really change his approach to the round.

“I played the exact same way I normally would,” Melliere said. “I just went out and hit shots and play my game whether it’s as an individual or as a team.”