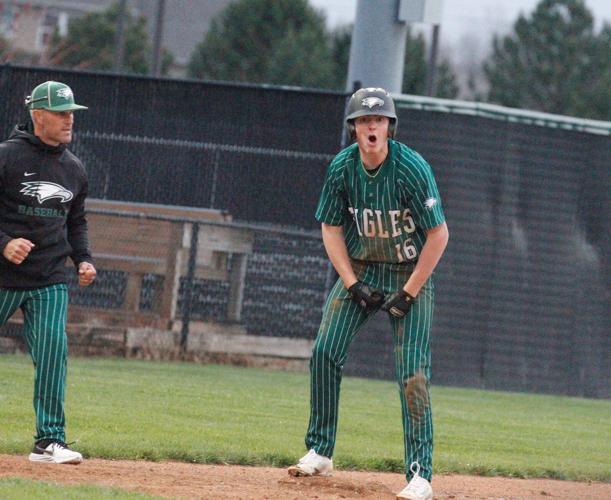 Easton Moore celebrates toward the Eagles’ bench after hitting a go-ahead triple on Friday night. 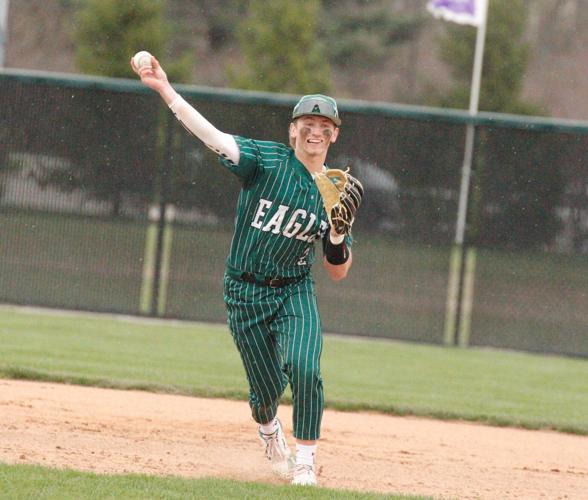 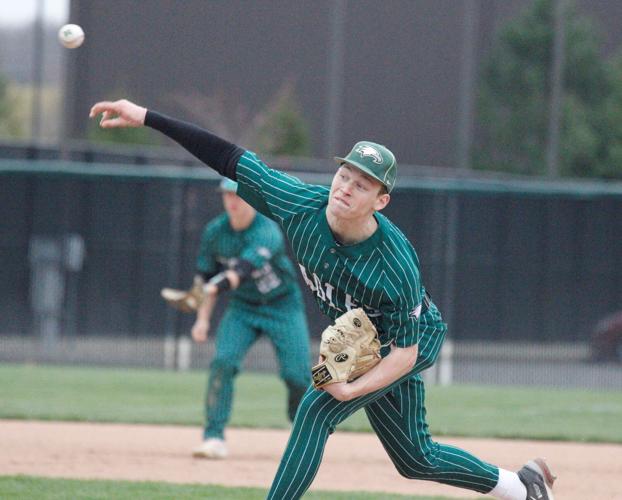 Aidan Hatcher got the win on Friday night as the Eagles’ swept Hamilton Southeastern.

Easton Moore celebrates toward the Eagles’ bench after hitting a go-ahead triple on Friday night.

Aidan Hatcher got the win on Friday night as the Eagles’ swept Hamilton Southeastern.

ZIONSVILLE — It hasn’t been the ideal start to the season for Zionsville junior Easton Moore.

But when his team needed a clutch hit on Friday night against Hamilton Southeastern, the junior infielder delivered.

Moore hit a go-ahead, 2-out, 2-run triple in the fifth inning, and the Eagles held on for a 3-2 win over HSE to sweep the two-game series.

“That pitcher was his type of pitcher,” Zionsville head coach Jered Moore said. “Easton has been getting into problems because he is getting deep into counts and is getting pitches he can’t drive. But Easton got a pitch he could drive and he came through.”

It was a clutch hit in a game that saw both teams squandered good scoring chances.

The Eagles left the bases loaded in the first, stranded one in the second and had five base runners in the third, but scored only one run.

In the fifth, it looked like they may strand multiple runners again.

Max Bond, who hit an RBI-single in the third to tie the game at 1, walked to lead off the inning. After a sacrifice bunt, Max Petrocelli was hit by a pitch.

Nate Horton then popped out, bringing up Moore, who got into a 2-2 count before driving a triple into right-center.

“We need contributions from everyone, and Easton is a good hitter, he has just gotten off to a slow start,” coach Moore said. “The guys were all rooting for him to get out of his slump, and once he drove that ball, I think he’s going to get going.”

HSE got a run in the top of the sixth on a passed ball, and got the tying run on base in the seventh, but Chase Wagner secured the save with two strike outs and a ground out.

The Royals took a 1-0 lead in the top of the second off Zionsville starter Aidan Hatcher, but couldn’t get anything else against the Eagle pitcher.

HSE stranded two in both the third and fourth innings, but Hatcher dug deep when he needed to.

He struck out nine in five innings.

“He got into a couple of jams, but Aidan is good,” Moore said. “When he locates his pitches, he is going to be fine. He got himself out of some jams, but that’s what we expect from him.”

Cam Hamlow and Jackson Hughes each went 2-for-4 for the Eagles. Brody Chrisman was 1-for-1 with two walks.

After a couple tough losses to No. 1 Fishers last week, the Eagles bounced back well, topping No. 6 Cathedral early in the week, before sweeping the Royals.

“We needed this week,” Moore said. “Early on, with the Tennessee trip and then Fishers, we saw some really good arms. So we needed a couple wins. We have faced some really good teams to this point, and there were some situations we didn’t come through or finish. It was good to get back on track.”

The Eagles travel to Lafayette Jeff on Tuesday.