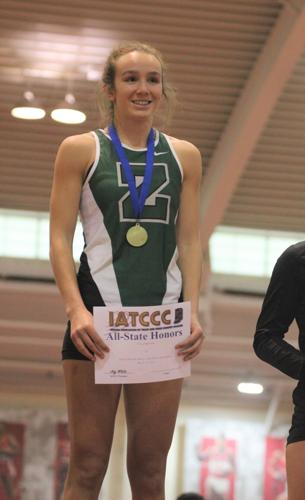 Michelle Nazarov stands atop the podium after winning the long jump at the HSR Finals. 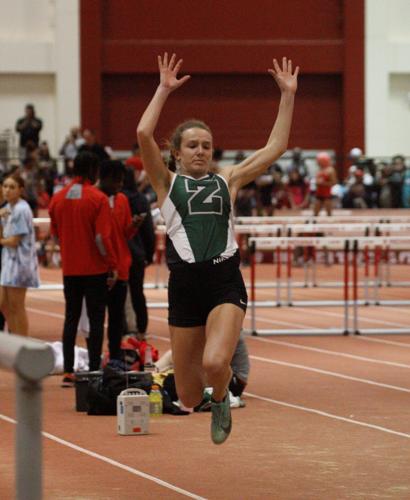 Michelle Nazarov competes in the long jump at the HSR Finals on Saturday. Nazarov won the event in a jump of 18-4.75. 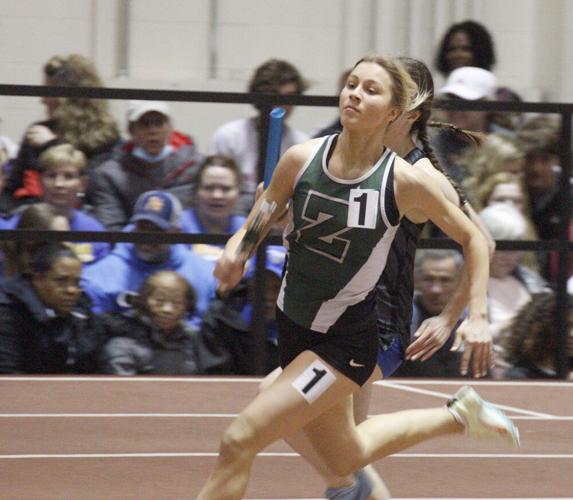 Michelle Nazarov stands atop the podium after winning the long jump at the HSR Finals.

Michelle Nazarov competes in the long jump at the HSR Finals on Saturday. Nazarov won the event in a jump of 18-4.75.

BLOOMINGTON — When the pressure gets higher, Zionsville senior Michelle Nazarov is at her best.

So at the Hoosier State Relays Finals on Saturday afternoon, Nazarov was in her element competing with some of the best track and field athletes in the state.

The Zionsville senior came through in the clutch, winning the indoor state title in the long jump with a distance of 18-feet-4.75-inches.

“I am extremely happy,” Nazarov said. “I’m happy that I get to keep on building what I did last year. I haven’t been able to practice that much indoors because of the limited number of meets, so I was kind of nervous coming in, but then I pulled through it and remembered what I learned last year.”

Nazarov, who won the IHSAA title in the event this past spring, has been working mainly on speed and strength this winter, and jumped just once in a meet, qualifying with a jump of 17-feet-1.25-inches, which was good for sixth best heading into the State Finals.

But when it came down to it, Nazarov knew what she needed to do and got the job done.

“The experiences last year helped a lot,” Nazarov said. “It helps with dealing with the pressure and competition, and I was able to remember some of the technique.”

Because of the way the indoor meet is set up and with the amount of people and events constantly going, there isn’t a leaderboard to tell the athletes of their progress during the meet.

That provided a different dynamic throughout the competition, but Nazarov just wanted to focus on what she could control.

“I really didn’t know how other people were doing,” Nazarov said. “So I just had to calm myself down and focus on my jumps.”

The quartet of Nazarov, Omema Anyanwu, Delaney Greeson and Elizabeth Raborn placed second in the 4x400 in a time of 4:03.58, less than a second behind Carmel.

Nazarov, Anyanwu, Greeson and Sophia Yovanovich placed third in the 4x200 in a time of 1:44.37, six hundredths of a second behind second place.

Those finishes were a big reason the Eagles finished third as a team overall.

“As they always seem to do, they stepped up when it mattered,” Zionsville head coach Drake Sterling said. “It is the kind of group that is tough and gamers. When it is time to run hard, they know what to do.”

The Eagles also got a big finish from Yovanovich in the 60-meter dash.

The senior wasn’t seeded to make the finals in the event, but had a strong prelim, then ran 7.79 in the finals to place fourth.

“She had a great day,” Sterling said. “Those were great races for her. She has been battling sickness this week, so we weren’t sure she was going to be here. But to place fourth in a loaded event, that was big for the team and really set the tone.”

Zionsville also got a sixth-place finish from Kennedy Merrell in the pole vault, as she cleared 11-feet.

The Eagles have a dual today against West Lafayette, then are off for Spring Break.

Sterling said experiences like Saturday are going to help the team as they head into the outdoor season.

“When it comes to big meets like conference and the post-season, these girls show up and know what to do,” Sterling said. “Meets like this build the confidence. But the girls know it doesn’t matter what happened today or over the next two months, it matters what you do at the end of the year. We have a senior heavy group, and they leadership and experience is going to be big.”